One of my biggest pet peeves is when people use the word shaman out of context. I see it as a huge problem within the pagan, witchcraft, and New Age communities, as well as, within academia for many reasons.* Here is a list of six general problems that I have with how it’s used and why.

*Note: I realize that there are many indigenous people who self-identify with the term shaman and I would never presume to judge their use of it. I am specifically referencing its use amongst nonindigenous communities and academics.

Shamanism has become a metonym for all religious leaders within indigenous cultures. The word shaman signifies a non-Western indigenous religious practitioner whereas a priest is a Western religious practitioner operating within a socially stratified ‘advanced’ civilization. Have you ever wondered why we don’t just call shamans priests? Don’t they act in much the same role? As mediators between humankind and the divine? How do you think Catholic priests would feel if we started calling them Imams and vice versa? This unconscious manifestation of early evolutionary theory and Western racism represents “a willful denial of the complexity of “primitive” religions and the reduction of their diversity to a simplistic unity that can be effectively contrasted with more favored constructs like “Christianity.” 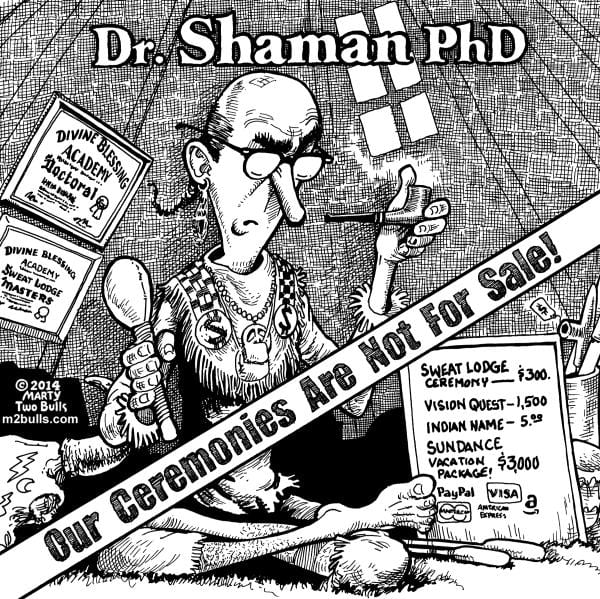 Shamanism has become a stand-in term for any and all indigenous spiritual practices. In some instances, it has even morphed into a larger category, Shamanism as a ‘religion.’ The obvious problem with categorizing all indigenous spirituality practices under the same term is that in doing so they are being stripped of their individual identity. L.K. Pharo states that “the paradigmatic post-colonial reduction of many indigenous religious systems to “shamanism” has created an impoverished view of religions that are no less complex and sophisticated than the so-called “Great Traditions.”

Did you know that it was standard policy for settler colonial nations (United States, Canada, Australia, Ireland, South Africa, New Zealand, etc) to ban the use of indigenous languages? Kids are still beaten in school for using their native tongue to this day throughout the colonial world. The broad use of the word shaman can be directly linked to these practices and the immense loss of language worldwide. The language of the colonizers (English, Dutch, Portuguese, Spanish,  French, etc) is seen as superior and thus the word chosen by them to define something (i.e. shaman for spiritual leader) becomes the status quo.

Inés M. Talamante, a Mescalero Apache professor of religious studies say this: “They raped us by taking away our language. Now they are stealing our religion by calling our medicine men shamans… Our language does not know shamans, and that name is used only by neo-shamans; not our changers.”

The typification of non-Western faith and religious practices stems from 19th century anthropological theories about the origins of humankind and its development. Theorists such as Herbert Spencer and Lewis Henry Morgan believed that human society evolved like organisms in a set and structured way. It was the result of the natural ‘evolution’ of cultures from lower to higher forms- three stages were identified (savagery, barbarism, and civilization). Guess what? Shamanism was associated with the most ‘primitive’ stage. As anthropologist Roland Dixon so eloquently put it (note sarcasm), shamans were “that motley class of persons, found in every savage community, who are supposed to have closer relations with the supernatural than other men.”

News flash: there are over 7000 languages spoken in the world today! Just 23 of these account for more than half the world’s population. That means a huge percentage of these are ‘indigenous’ languages. I guarantee they each have their own unique word for the people who act as spiritual leaders, guides, and mediators. Using the word ‘shaman’ to describe any of them (unless from the above named Tungus region) is just plain lazy. With modern access to the internet, it doesn’t even take that much work. Do your research!

Do you live in Tunguska on the Siberian Plateau?  Do you herd reindeer? Were your ancestors the victims of a horrific genocide carried out by the Cossacks? If not, then you definitely aren’t a shaman. Shaman is a Tungusic Siberian word used by said people to describe their spiritual leaders, it stems from the root să which means to know. It was first recorded historically by 17th-century Dutch explorers and has since taken on a meaning of its own. Anthropologists, New-Age healers, archaeologists, neopagans, religious leaders, indigenous groups, and art historians, just to name a few, all use the word shaman.

For further reading and more information check out:

Hernández-Ávila, Inés. “Mediations of the Spirit: Native American Religious Traditions and the Ethics of Representation.” American Indian Quarterly 20, no. 3/4 (1996): 329-52.

Pharo, L.K. “A Methodology for a Deconstruction and Reconstruction of the Concepts ‘Shaman’ and ‘Shamanism.’” Numen: International Review for the History of Religions. vol 58, no. 1 (2011): 6–70.

Plate, S.B.”The Museumification of Religion: Human Evolution and the Display of the Ritual” in Religion in Museums:Global and Multidisciplinary Perspectives, edited by Gretchen Buggeln, Crispin Paine, and S.Brent Plate. Bloomsbury Academic. 2017: 41-47.