The Spirit Pond Runestones are a set of three small stones that supposedly contain old Norse text. While they are little known today, they made quite the stir back in the 1970s when they were first discovered. Aside from the obvious historical implications provided they were authentic, these runestones are worth noting for the racist undertones present in their creation.

The stones were ‘discovered’ in the small coastal town of Phippsburg in Sagadahoc County, Maine. It has a total area of 71.20 square miles, of which 42.62 miles is water. It lies on a peninsula dividing the Kennebec River from Casco Bay within the Gulf of Maine. It is the home of many significant historical sites, including the site of Popham Colony- the first known English settlement in New England.

They were found by Walter Elliot Jr of Bath, Maine, a self-identified hunter of old ‘Indian artifacts’ (a.k.a-destroyer of archaeological sites). He was ‘poking’ around shell middens when he supposedly spotted a stone with markings on it. He picked it up and then looked for more, quickly spotting two others. Two of them contain lines of text and the third has what some have identified as a map of sorts. On closer inspection, Elliot realized that they were special and the next week brought them into the Maine Maritime Museum in Bath for another opinion. The curator at the time identified them as containing possible runic inscriptions.

Elliot went public with the discovery and they gained widespread fame within a few years. However, in 1974 (just three years after their discovery) the first attempt to authenticate them declared them to be fake. Einar Haugen of Harvard University analyzed the inscriptions on the stones in comparison to other known runestones and declared them to date no earlier than 1932. His stance is that they were a copycat of the above mentioned Kensington Runestone (which has also since been declared a fake) as there were some similarities between them and stated that they contained only “a few Norse words in a sea of gibberish.”

Spirit Pond Preserve is managed by the Phippsburg Land Trust. It contains an easy walking trail and is open to the public. Spirit Pond itself is a tidal pond near Popham Beach. The preserve offers views of the Morse River salt marshes as well as an old mill dam, and bountiful stone walls. I visited just a few weeks ago while out on a day trip with my family. While there are no runestones to be found, it’s still a lovely little walk with some beautiful views of the pond. As far as viewing the runestones, I have been unable to. They are in the possession of the Maine State Museum and as of my most recent request last year, they were out on loan for analysis. I was able to obtain the high-resolution photos in this post via a request to the museum who graciously sent them to me. 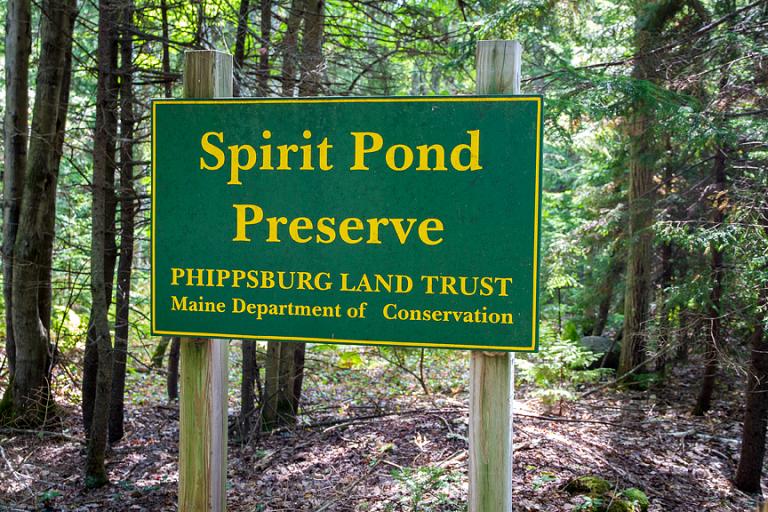 What’s really interesting to me (especially as a pagan), is the historical significance behind these kinds of hoaxes.

If the three rune stones were found to be authentic, they would be a landmark discovery as they would provide the first archaeological evidence of a Norse expedition into Maine. It is indisputable that the Norse settled in North America (L’Anse aux Meadows) but any evidence for their venturing further south has so far been inconclusive. The discovery of the Norse Penny seemed to validate this claim but has since seemed to merely suggest the extensive indigenous trade networks present at the time.

So what would prompt someone to make fake runestones?

Unfortunately, the answer is pretty bleak-racism and notions of white superiority. At the time these ‘runestones’ started surfacing, debates about ethnic origins and superiority of the races were still alive and well. These ‘runestones’ seemed to prove that the Vikings had settled in North America prior to Columbus, thus giving those of European descent an ancestral claim to the land they had colonized just a few hundred years prior.

Furthermore, it was beyond belief that the ‘savage’ natives of North America could have possibly constructed monuments like the Great Serpent Mound of Ohio or the incredible cliff dwellings of the Ancestral Puebloans. So of course, the white, male, archaeologists of the day claimed that they were made by some prior white race who had been subsequently wiped out by current ‘savage’ tribes. Sort of like how those Ancient Astronaut Theorists of Ancient Aliens claim that Old Kingdom Egyptians couldn’t possibly have built the pyramids, no? 😉

The worst part of this whole situation is that there are people out there among the pagan community who are still preaching this extremely harmful and racist rhetoric. Take the relatively recent example of the Kennewick Man, one of the oldest known skeletons ever discovered in North America in 1996. Upon the premature declaration of the first archaeologist to examine the remains (James Chatters) that they appeared to be Caucasoid, all sorts of legal problems ensued that were not resolved until 2017. Of note for this post is the fact that the heathen (and openly racist) group the Asatru Folk Assembly sued in order to have the bones genetically tested, claiming that it was their ‘white ancestor.’

Big surprise that they turned out to be indigenous and the ancestor of several present-day North American tribes.

Anyways, point being is that racist, hate-filled people will use any tactics, including artifact fraud to push their agenda.